Why do humans get acne? a hypothesis

Acne is a disease unique to humans and is associated with sebaceous glands that are found in a high density on the scalp, forehead and face. Despite being a near universal problem in adolescence, the reason why such troublesome sebaceous glands exist at all is not well understood. Some interesting theories have been postulated including roles for skin maintenance, immunological function and perhaps even pheromones, but pre-pubertal skin which has sebaceous glands that are largely inactive, is healthy.

Dystocia, obstructed labour, is unique to humans and no other animal has as much trouble giving birth as humans. This is thought to reflect the relatively large human foetal head and proportionally small maternal pelvis. There is high density of sebaceous glands on the face, chest and back; these are exactly the same structures that pose the greatest obstruction during childbirth. Sebaceous glands develop after the fourth month of gestation and are large and well-developed at birth. Sebum production is also relatively high at birth. Having extra lubrication at these sites would help make the baby more slippery for birth conferring a selective advantage to successful delivery, as does the presence of the vernix caseosa, a white creamy substance, unique to humans that coats new-born infants.

It is proposed that the sebaceous glands that cause acne are present on the face and forehead as they confer a selective advantage by ‘lubricating’ the widest parts of the new born baby to ease the passage of childbirth. Later in life, sebaceous glands may be inappropriately and pathologically primed, driven by a combination of hormones, diet and lifestyle to create acne.

Read Dr Shannons full Medical Hypotheses: Why do humans get acne? a hypothesis

Oops! We could not locate your form. 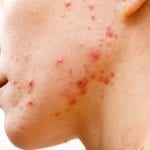